The day of the night of the super pink moon

Moonrise tonight at 7:25 pm. Officially full moon at 9:35 pm. Last night's almost full moon set about 7-ish this morning. SiSi and I missed seeing  the moon because the clouds left over from the middle-of-the-night thunderstorms hid it. During the Winter I had forgotten just how unnerved SiSi gets when the lightning and thunder are close and frequent. She needed lots of reassurance about 2:15 to 2:30 this morning. We told her that we wouldn't let the thunderboomers get her.


The Better Half now reports that the day lily patch next to the burr oak out by the road is several inches high. Later this afternoon the sun is supposed to return. That's when I'll go take a look at the pocket gopher trap and then see for myself how the day lilies are doing. I'm hoping some sunshine will help me shake the feeling that we're living in the midst of Yeats'  The Second Coming.

As I hope you're aware, April is National Poetry Month. The Academy of American Poets (of which I'm a member) has asked "readers to share a poem that helps to find courage, solace, and actionable energy, and a few words about how or why it does so." Some of those poems can be found here. Others are on Twitter, Facebook or Instagram with the  hashtag #ShelterInPoems.

Locally, there'll be an online reading by area poets at 7:00 pm on Saturday, April 18. 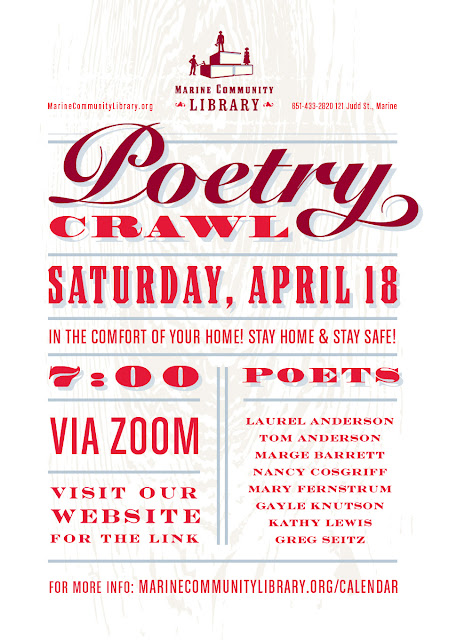 April is also, as we've mentioned recently, a time of seasonal high water. For that reason, we are delighted to see one of our favorite poems is in the #ShelterInPoems listing from an Anita P., of our home town of Boston.

The Negro Speaks of Rivers

I've known rivers:
I've known rivers ancient as the world and older than the
flow of human blood in human veins.
My soul has grown deep like the rivers.
I bathed in the Euphrates when dawns were young.
I built my hut near the Congo and it lulled me to sleep.
I looked upon the Nile and raised the pyramids above it.
I heard the singing of the Mississippi when Abe Lincoln
went down to New Orleans, and I've seen its muddy
bosom turn all golden in the sunset.
I've known rivers:
Ancient, dusky rivers.
My soul has grown deep like the rivers.

Emergence, when, or not?

This morning we enjoyed a pleasant surprise as we went to rehang the bird feeders. A herd of about half a dozen whitetail deer were knoshing their way across the yard and into the woods' edge. Later, while returning from an essential trip to the bank so we could complete an essential visit to the food co-op, we noticed a pair of swans flying away from the Carlos Avery Sunrise pools. Against a cloud-covered sky, swans in flight are enough to make me believe in angels. Moments ago a trio of ducks whisked past the treetops toward the open water pools to the West. Thunderstorms are in tomorrow's forecast. Regardless of #Stay-At-Home orders for humans, life in the other than human world goes on without a hitch.


Soon, I hope, marsh marigolds will begin to emerge. Then they'll come into bloom. I always find they bring an extra dose of cheeriness to the countryside in early Spring. Sometime shortly after Easter I expect to see a marigold bloom begin this year. We'll see how close I come to estimating peak marigold bloom occurring late this month.


Meanwhile, I'm growing concerned about the beach plum plants that spent the Winter in  pots in front of the downstairs windows. The two that had some green leaves when we brought them in  last Autumn still have some green leaves. The two that had no living leaves still have none. None of the four seem to be showing any signs of life. It's getting to be fingers crossed time. It's almost as though bringing them into the house put  them into a state of suspended animation or  arrested development.